On May 5, 1996, the Catholic Women's League of St. Mark's, on the occasion of their fortieth anniversary, undertook to present portraits of the Pastors of St. Mark's. These now hang in the vestibule. They also prepared biographies of the first three Pastors, which are reproduced here (slightly edited), as a historical record.

Father Gerald Cochran was born in Toronto, Ontario on March 25, 1914. He attended St. Peter's Church and School in Toronto, and a short time after graduating from De La Salle High School he entered St. Augustine's Seminary.

Father Cochran was ordained to the Holy Priesthood on June 7, 1941. His first parish assignments were St. Cecelia's Church, Toronto 1941-1947 and Holy Family Church Toronto 1947-1955. In 1955 he was appointed Pastor of St. Mark's Parish in Etobicoke, at that time a parish without a church. Father Cochran led the building fund drive for St. Mark's and the cornerstone was laid and blessed by Rt. Rev. E.M. Brennan, Vicar–General of the Diocese, on November 27, 1955. The first Mass was celebrated by Father Cochran in the new church on Holy Thursday, 1956. The blessing and dedication of St. Mark's Church took place on Sunday, May 27, 1956, by His Eminence James Cardinal McGuigan. In addition to the Church, he spearheaded the building of St. Mark's School under the Combined Roman Catholic Separate School Board of Etobicoke where he served as a trustee for several years.

Father Cochran's youth and energy were challenged when he was called to build St. Mark's Church. His infectious enthusiasm caught the imagination of his new parishioners and they responded to the challenge.

His zest for living, sense of humor and love of sports endeared him to children. Father had a great passion for the sport of kings. He loved music and the parish choir rose to his expectations. St. Mark's parish produced three highly successful concerts in the parish hall which he enjoyed immensely.

Father Cochran possessed a pure heart. He saw the best in everyone. The poor from all over Toronto found their way to his door and they were never turned away. The example of his deep prayer life enriched the spirituality of his people.

Father Cochran died on January 13, 1986 from injuries received in a hit and run accident on December 30, 1985. Father Cochran will always be remembered.

For 23 years Father Brennan was our spiritual father, and we were his family. His serenity, holiness, humility, and sense of humor were qualities for other priests to imitate. … Following the tumultuous days of Vatican II, St. Mark's, under father Brennan's guidance, remained an oasis of orthodoxy. Father never taught error or engaged in abuses of the liturgy. He was a much loved and respected pastor.

Father Krafchik was able to relate to his people on many levels. He loved the outdoors, particularly hunting, fishing and gardening. He enjoyed playing sports and was a member of St. Mark's Bowling League.

Father Krafchik was a priest of great pastoral zeal. He was deeply committed to the welfare of his parishioners and he was faithful to the teachings of the Church. He was a kind and understanding pastor who ministered to his people in their need. His gentleness, holiness, and respect for his parishioners inspired confidence, trust, and love in return. Father Krafchik was a true example of Christian charity.

Father Edward Koroway was born in Toronto on April 4, 1951. He was ordained on April 3, 1982, in Rome, for the diocese of Westminster, England. He returned to Toronto in 1986, and was appointed Pastor of St. Mark's on June 27, 2007. He has served the parish since then until the present. 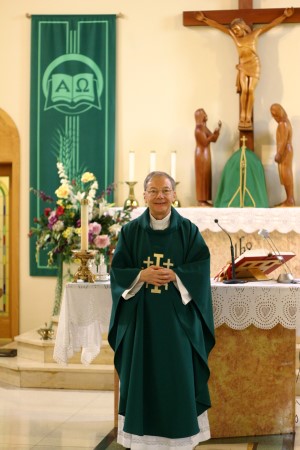